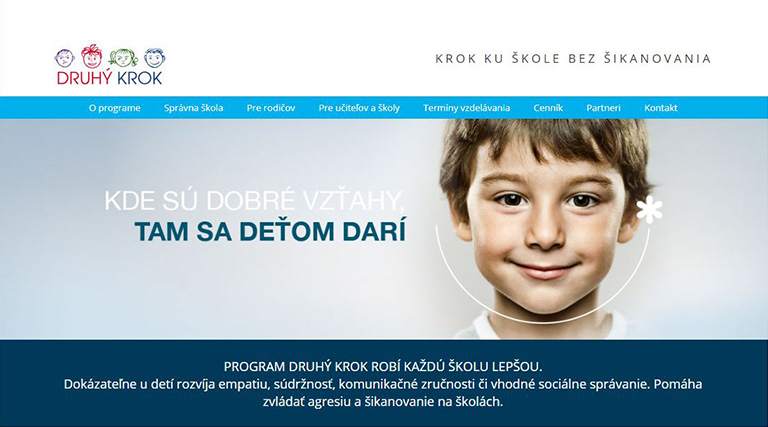 We are honored to receive the VIA BONA 2014 Good Community Partner Award because Druhy Krok is a program that we are proud of, in whose strength and sense we believe, and which offers real benefits to children and families.

“I will share my toys.” “I help my classmates.” “I smile at people.” “I know how to agree.” “I listen to others.” “I resolve conflicts peacefully.”

It’s children’s statements like these that motivate Profkreatis, a nonprofit organization in Slovakia, to promote and expand use of the Second Step program, or Druhy Krok, as the adaptation is called in Slovak. The program has made a huge impact on the social-emotional development of children in Slovakia, and since 2010, Profkreatis has had great success in expanding it. More than 150 elementary schools use Druhy Krok, with more than 250 teachers trained and certified to teach the research-based curriculum.

In January 2014, the Slovak Ministry of Education accredited the program for use in elementary schools. This legitimized the program in Slovakia and has helped Profkreatis promote it to more schools and teachers. Profkreatis has support from celebrities, mayors, and other prominent individuals as well.

Dr. Richard Rasi, Mayor of Kosice, has invited more than 100 teachers to a town hall meeting to learn about Druhy Krok. With support like this and the momentum it creates, the Profkreatis team hopes to expand the program to five more cities in Slovakia.

Slovakian Peter Bernasovska says, “I have two children and wonder what they will get out of school. Teaching is mostly focused on factual data, which everyone can easily locate anywhere on the Internet. But we know that humans are not only shaped by basic knowledge, but by how they learn to communicate, fit into a team, and manage their emotions . . . I am, therefore, very pleased that the Second Step program is being used in schools. Such emotional education is a preventive against aggression in children. If we want to be a better, more advanced social culture, we need to start with the children.”

Profkreatis has also received generous support from GlaxoSmithKlein, one of the world’s largest multinational pharmaceutical companies, which provides philanthropic backing for health and wellness projects. In January 2014, with the company’s support, Profkreatis trained and certified 96 teachers from all over the country and provided Druhy Krok to 54 schools. GlaxoSmithKlein also funded a marketing campaign that included newspaper articles and TV and radio spots.

The success of Druhy Krok is not only helping children with their social-emotional development; it also can have a positive impact on families. Psychologist Eva Gajdosova says, “Second Step makes sense and actually helps children. Sometimes so much so that children educate their parents. One student of mine was witnessing parental quarrels, which were happening quite often. Their daughter was just six years old, and explained to them exactly how to resolve the conflict.”

In January 2014, Profkreatis began implementation of a longitudinal study to evaluate the effectiveness of the program in schools. The first phase was completed in January 2015. With evidence to support the program’s effectiveness on reducing violence in schools and increasing social-emotional development, Profkreatis hopes to expand the curriculum’s reach even farther.