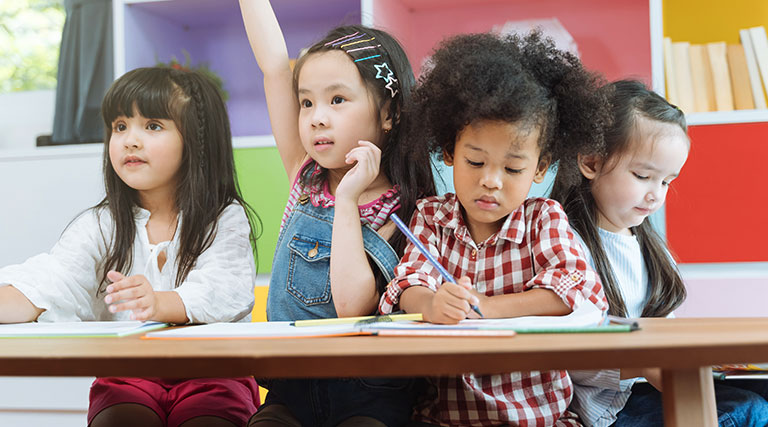 Everyone is now using the same words to talk about trauma and social-emotional learning, and there’s a greater appreciation of why schools need to explicitly teach social-emotional skills and embed SEL practices throughout the day.

With Second Step Social-Emotional Learning implemented in two thirds of classrooms across the district, teachers say that it’s helping them view student behavior through a different lens. 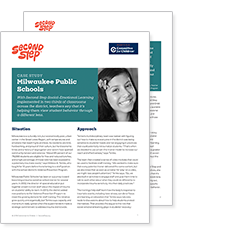 Milwaukee is a culturally rich, but economically poor, urban center in the Great Lakes Region, with temperatures and emotions that reach highs and lows. Its residents are kind, hardworking, and proud of their culture, but hard economic times and a history of segregation and racism have sparked community tension and violence. “About 85 percent of our 76,000 students are eligible for free and reduced lunches, and a high percentage of those kids has been exposed to a potentially traumatic event,” says Melissa A. Temke, who taught for 10 years before transitioning to a staff position with the school district’s Violence Prevention Program.

Milwaukee Public Schools has been on a journey toward becoming a trauma-sensitive school district for several years. In 2012, the director of special education put together a team to train staff about the impact of trauma on students’ ability to learn. In 2013, the district added new positions to the Violence Prevention Program to meet the growing demand for staff training. The initiative grew quickly and organically, but Temke says capacity and momentum really ignited when the superintendent made a strategic commitment to address trauma districtwide.

Temke’s multidisciplinary team was tasked with figuring out how to make sure everyone in the district was being sensitive to students’ needs and not engaging in practices that could potentially retraumatize students. “That’s when we decided to use a train-the-trainer model to increase our reach and effectiveness,” says Temke. The team then created a series of video modules that could be used to facilitate staff training. “We wanted to make sure that every potential trainer delivered the same content, but we also knew that as soon as a trainer hit ‘play’ on a video, we might lose people’s attention,” Temke says. “So, we also built in activities to engage staff and give them time to talk to each other about what they could do differently to incorporate trauma sensitivity into their daily practices.” The trainings help staff learn how the body’s response to traumatic events, including toxic stress, can derail focus and learning, an education that Temke says naturally leads to discussions about how to help students protect themselves. That provides the segue to the role that social-emotional learning plays in students’ recovery: that teaching students specific social-emotional skills, while creating a climate of safety and support, can help students heal from trauma and become resilient in the face of adversity.

“After reading a white paper published by Committee for Children called ‘Safe, Supported, and Ready to Learn,’ we were able to better articulate the connections between SEL and the Second Step program to our Trauma-Sensitive Schools work,” says Temke. Several schools and Head Start classrooms in the district had already been using the curriculum, but they adopted it districtwide last year (in 2017). Every classroom from preschool to middle school now has access to it, and about 66 percent of teachers have fully implemented it in their classrooms. Given that it’s only been a year, Temke says they’re pleased with the level of participation and success. “It’s been all sorts of wonderful working with Committee for Children and Second Step. Committee for Children has really helped to give us a voice around SEL and provide us with the tools, support, and network we need to guide our work.” Temke also says that the Second Step SEL curriculum is taught as a Tier 1 instructional program for all students and that every school has a PBIS Tier 1 team and a Second Step champion. (PBIS is short for Positive Behavioral Intervention and Supports, and is used interchangeably with SWPBS, or Schoolwide Positive Behavior Supports.)

To boost classroom use, Temke’s team broke down the lessons week by week and created a pacing and tracking guide. They’re currently collecting data to better understand what support might be needed to help schools improve daily practices. The biggest obstacle to overcome, according to Temke, is helping teachers feel they have permission to teach the Second Step lessons. Temke says that even though they know how important social-emotional well-being is to academic success, some teachers worry their evaluations might suffer if they’re caught taking a “break” from core academic subjects. She says the schools that are doing really well have principals who encourage staff to use the Second Step program to teach social-emotional skills and build trauma-sensitive communities. “That’s why we’re working to empower every school to take control and responsibility for increasing implementation in their respective buildings,” she says.

Reinforcing Second Step skills schoolwide and engaging families in the program will be two focus areas to improve next year, says Temke, along with embedding Second Step vocabulary and skills into Tier 2 and 3 PBIS procedures. They also have plans to boost usage of the Second Step Principal Toolkit and both the Bullying Prevention and Child Protection Units. Those add-on units are currently available to check out on request. “We did a couple of professional development sessions to introduce the materials, and the response was good. Ultimately, we hope to use those universally across the district, too,” says Temke.

Milwaukee Public Schools’ intentional, trauma-informed approach to promote resilience and healthy social-emotional development, including the implementation of the Second Step program, seems to be reducing negative risk factors and increasing chances for success in school. Anecdotally, Temke says she has heard story after story of not just improved student behavior, but also a greater awareness and understanding among both staff and students of the connections between trauma and learning. “Everyone is now using the same words to talk about trauma and social-emotional learning, and there’s a greater appreciation of why schools need to explicitly teach social-emotional skills and embed SEL practices throughout the day,” says Temke. “Teachers tell us all the time that kids love Second Step and look forward to the lessons.” Rather than being a chore, she says teachers report liking the curriculum and say that it’s helping them view student behavior through a different lens. For example, if a student is being obstinate or acting out, they now stop to consider why and how teaching specific social-emotional skills might mitigate the problem behavior.

Temke says that in addition to teachers’ reports of improvements in classroom management and student behavior, centralized teams that evaluate special education referrals have shared that they’re now considering whether a child’s “disability” might actually be related to trauma and addressed in other ways. Aside from feedback, the district tracks office discipline referrals, suspensions, and attendance rates as well as school climate survey data. Temke admits that the metrics they use are limited, but they’re in the process of putting together a well-thought-out measurement plan to discover and promote what works. “Putting our awareness into action is where we’re at,” she says. “We realize we still have work to do, but we’ve made great progress. What drives us forward is that we really believe students deserve to feel safe, supported, and armed with the skills necessary to overcome future challenges, traumatic or not.”